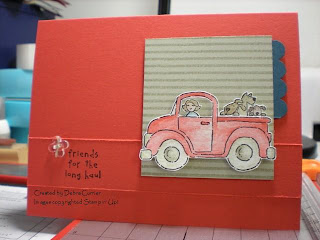 Hello everyone! It's the middle of the week and that means it is downhill to Friday! It has been a fast week so far. Driving to Montrose every night is getting tiring. We did lose last night and it wasn't pretty. Our main problem was that we just couldn't find the ball to hit it with our bats! And if we did hit it, it was a super easy ground out. We got only one run and that was from a boy who hit it out of the park! What a hero he is! I believe that if we can start hitting the ball, we will be in the running again. So, we move to the losers bracket and try to work our way out of it. At least it won't be as late a night as last night. My goodness! We didn't get home til after midnight! And my husband had to get up early to start working. Me? I had to get up (but not quite as early) to wash some very stained white baseball pants. Yuck! Why do they have to wear white?
Today's card is another one that I copied from the catalog. This one came from the top of page 58. I don't think that I have used this stamp set in forever! But it is what I envisioned when saw the layout. So while the stamp set is not new, the main color is. Say hello to Poppy Parade! And I so love the dogs hanging out in the back! Too fun! Thanks for stopping by and have a super day!
Card Recipe: Stamps- Loads of Love, Loads of Love Accessories, Solid Stripes; Paper- Confetti White, Poppy Parade, Sahara Sand, Not Quite Navy; Ink- Poppy Parade, Not Quite Navy, Blush Blossom, Crumb Cake, Early Espresso; Accessories- itty bitty buttons, linen thread, cutter kit, scallop edge punch, dimensionals
Posted by Deb at 9:01 AM