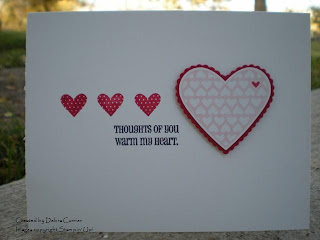 Good morning, Friends! It is the start of another week! I hope that it looks good for you! Nick played in his basketball tournament yesterday and had a ton of fun! They did lose their three games right in a row but it was fun. And for Nick (at least), it was his first time in playing in a tournament like this. They play half court and so he had some learning to do but he picked up on it pretty quickly. The first game they lost was to 6th graders who were quite a bit taller than they were. There were a ton of teams there and it was just a lot of fun! I hope he gets to do more! So tonight starts his indoor soccer season. It doesn't go for very long, though. They will have games on Monday's and Wednesday's through the first week of December. The great thing is, they don't have any practices. It is just come and show up for the game. And it goes really fast! Nick loves it!
Today's card was inspired by the Fall-To Layout at Clean & Simple. I have to say that I really like how this one turned out! And it was so easy! I also have to laugh because I seem to be looking way ahead to the next holiday - lol!! But I couldn't wait to post it. The color combination that I used is a color combination of new designer paper that is coming out in the new Occasions mini catalog! I just love it! Thanks for stopping by and have a super day!
Card Recipe: Stamps- Filled With Love; Paper- Whisper White, Real Red; Ink- Pink Pirouette, Real Red, Basic Gray; Accessories- Scalloped Heart of Hearts embosslit, heart punch, dimensionals
Posted by Deb at 7:58 AM