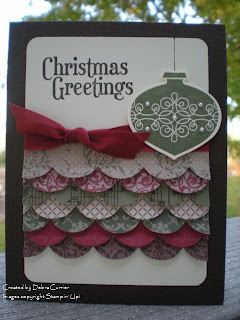 Good morning, Friends! It's Friday and that means the weekend is here! I can not believe that we are at the end of the month! Where did it go? Nick has his last soccer game of the season tomorrow and it is supposed to rain. But Nick says he really likes playing in the rain. Guess it makes him a little tougher. I don't like watching the game in the rain, though :) So yesterday I went to Wal-Mart and shopped for a Halloween costume. Still not sure what I was looking for. But what I really liked about Wal-Mart is that they had pieces of items that you could put together for a costume. So, I bought some pirate stuff, a cape, a fake beard, and a scary Frankenstein looking mask. I just knew he would love the mask. Then I bought a black shirt. So when he got home from school I gave him all the stuff and told him my idea and he went to town! We found an old pair of black slacks and cut the cuffs uneven and took the black shirt and did the same and he cut holes in it. He already had an old pair of black shoes. Then he put the mask on and... Well, let's just say he makes a really great zombie/Frankenstein/scary looking thing!! Sigh... Glad that's over! Then he got a clever idea and put the fake beard on over his mask! I can guarantee that no one will have a costume like that! I was really proud of myself and of him for coming up with something! Now to make the deviled eggs for this afternoon's party...
So today's card is for the challenge on Create with Connie and Mary. This is their Holiday Edition challenge that you have to subscribe to. And you still can! Anyway, the challenge has two parts and the first part is to use the colors in the Deck the Halls designer paper (Soft Suede, Cherry Cobbler, Early Espresso, Always Artichoke, Very Vanilla, Crumb Cake). The second part was to make a card that was "over the top" or one that you would only make one of. So here is my version of the challenge. What better way to use all these colors on your card than to use different pieces of the designer paper itself? And that's what I did. I cut strips of various pieces of the designer paper and then used the Tasteful Trim die to cut the scallops. I staggered them and glued just the top part down so that I could sort of "ruffle" the scallops to make it look more dimensional. I don't think I will be making more than one of these. It truly is special!! But it was fun to make. Thanks for stopping by and enjoy your day!
Card Recipe: Stamps- Grateful Greetings, Tags til Christmas; Paper- Early Espresso, Very Vanilla, Deck the Halls designer paper; Ink- Early Espresso, Always Artichoke; Accessories- Cherry Cobbler seam binding ribbon, ornament punch, corner rounder, Tasteful Trim die, basic pearls, dimensionals
Posted by Deb at 8:12 AM