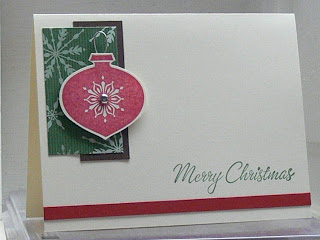 Good morning, Friends! I am so sorry about waiting to post again. But this time I do have a good excuse. Last Sunday evening my son complained about not feeling well. He sounded congested so we let him sleep upstairs with us. But what was worse was that his breathing sounded so labored and he complained about it being hard to breathe. Well, no parent likes to hear anything like that from their child (or from anyone for that matter). So the next morning I tell my husband to take him to the doctor. And he does. And the doctor admits him into the hospital. At first they weren't sure if it was a virus or the flu or what so they did a chest x-ray which showed inflammation of the lungs. They also said that his oxygen levels were extremely low. So they put him on oxygen and gave him a nebulizer which seemed to help but there was still a lot of wheezing. So, my husband and I spent Monday night in the hospital with our son who was hooked up to all kinds of machines. Nick was also very dehydrated and once the liquids got pumped into him he immediately looked much better but still couldn't breathe very well. That first night in the hospital was scary and we didn't get much sleep. Well, it snowed a TON here and they cancelled school on Tuesday which was a good thing for me since I wasn't going anyway. And we were kind of expecting to be able to take Nick home as well. But the doctor came in and didn't like his oxygen level. It was still real low on room air. Well, that was very upsetting to Nick (and us) but that's the way it is. I did go back home to go to work the next day and Pat stayed at the hospital. Same routine for Wednesday. No real changes and again they stayed at the hospital and I went home to go to work the next day. Thursday the doctors ordered new chest x-rays and blood work but they came back normal. By this time, Nick is going stir crazy. He is ready to be up and around. So my husband asks for a portable oxygen tank and gets Nick to walk around the hallway. He also took a shower and by the afternoon his oxygen levels were up with just room air. We were so excited and we knew that we would be going home that night. And we did!! I am sorry that was such a long story. The doctors determined it was a severe asthma attack and so we have inhalers and are learning how to recognize the triggers and the signs that he needs to use them. It just seems so odd that someone so active as our son would need them. But I don't want to end up at the hospital like that again!!
So do you still want to hear about my card? Well thank goodness it is an easy one. I just love the ornament punch for that!! Anyway, have a super day and stay warm!!
Card Recipe: Stamps- Delightful Decorations, Four the Holidays; Paper- Very Vanilla, Read Red, Chocolate Chip, Merry Moments designer paper; Ink- Real Red, Garden Green; Accessories- silver cord, silver brad, ornament punch, dimensionals
Posted by Deb at 8:39 AM